A Home, A Stage for Telling Tales

The latest issue of Wallpaper* looks at prime lumber retreats across three continents. I got to write about a suburban retreat in Canada’s Atlantic province of New Brunswick. The December 2017 article is copied here. (Photos by Julian Parkinson) 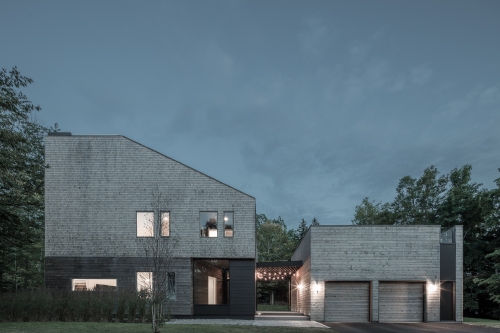 Nestled in a wooded lot, this new home by Acre Architects brings a contemporary edge to the suburbs of Saint John, New Brunswick. The conservative maritime setting has few contemporary design precedents, allowing the locally-based firm the freedom to explore new directions. Driven to design structures that ‘inspire people to live great stories’, partners Monica Adair and Stephen Kopp worked with the homeowners, a young, growing, musically inclined family of five who most value social interaction and connecting with the outdoors, to create a house that would best reflect their personality and lifestyle. 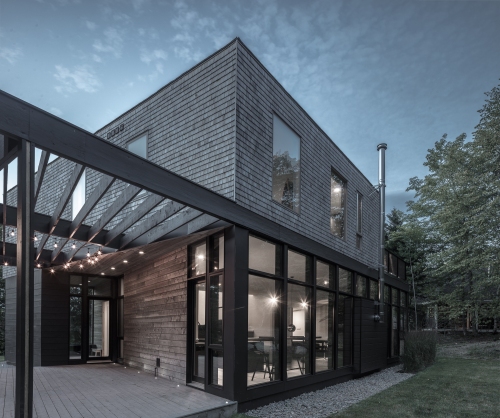 The house is clad in silvery cedar shingles that recall the local vernacular, but with a distinct cubic form and tapered roof that set it apart from the town’s Victorian context. It is linked by a wood trellis to a garage, whose discreet rooftop terrace provides 360˚views of the treeline. Floor-to-ceiling glazing along the building’s southern elevation extends the open living/dining/kitchen area to the outdoors. Sight lines in, out and throughout the home allow parents and children to stay connected. 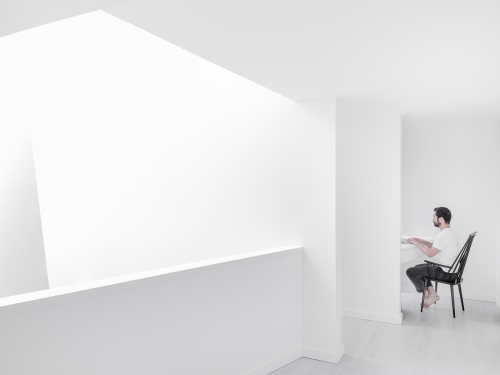 A raised area, which can be used as a stage for impromptu performances, is capped by a dramatic lightwell rising the full height of the house. Spaces expand and contract as occupants move across the 11ft-high living areas and then up into the private quarters. Tucked behind a wall, the stairwell’s slow gradient transitions from dark oak floors up to white maple. Sunlight cascades through the well, bouncing across the white surfaces, changing by day and by season.

The material palette is restrained. Local artisans have been commissioned to create pieces such as the steel handrail and glazed clay kitchen tiles, but there are also playful, unexpected notes, such as a concealed door revealing Superman-blue painted stairs leading down to the playroom. 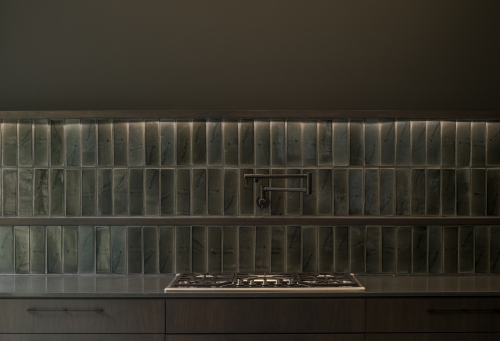 Acre Architects featured in Wallpaper’s* Architects’ Directory 2016. Its growing portfolio of awards confirms that small projects can have great impact. This space takes on the family’s identity: playful and social while acknowledging local rootedness and tradition. The unconventional, unconstrained floor plan choreographs the life the family wants to live. Of its ‘storied architecture’, ‘the house finds a way not to blend in, but to pay homage to what is there and move forward, to think about the future of architecture for families,’ says Adair.